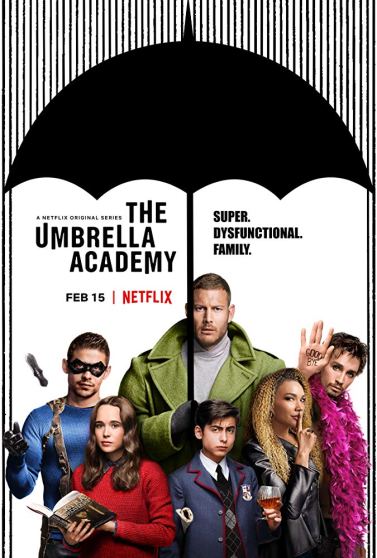 The moment I saw the trailer for Netflix’s The Umbrella Academy, I knew this was made for me. As much as I love the good ‘ol standard caped crusader fare with their shiny suits, unerring sense of justice and Messianic Complex, I have always had a soft spot for misfits, oddballs and anti-hero superheroes. And The Umbrella Academy is nothing but. They’re spooky, ooky and kooky.  They’re basically the Addams Family of Superheroes, except ten times more dysfunctional.

Now this isn’t to say that The Umbrella Academy is perfect, because it is not. The show has some moments of dawdling, halfway through the season, mostly involving not quite interesting backstories, and frankly sometimes spending time on events that do not drive the plot forward.

But in the grand scheme of things, it has a lot going for it. First off, it is a stylish superhero series that has its own aesthetic. Perhaps the best way I can describe it is that it has the look and feel of Wes Anderson and Tim Burton combined.  And it has plenty of weird-ass elements that sparked my interest. Like an Alfred Pennyworth-like butler but he is an ape. And a robot mom. Second, I am in love with the soundtrack. It reminds me of how carefully curated The Guardians of the Galaxy mix tape is, so much so that when you listen to it, you can’t help but picture the story in your mind. And while The Umbrella Academy doesn’t go to that level, but it comes close. Third, Robert Sheehan. Now this isn’t actually the first time I’ve seen his brilliance. Misfits (2009-2013) was my first introduction to him. And while Klaus is about as chaotic as Nathan, they differ in a lot of ways. But Sheehan is just so good at playing these kinds of outrageous characters and he is just so much fun to watch. Fourth, Aidan Gallagher. Now, I had no idea who this kid is prior to this. But you certainly have to have a certain degree of awesomeness to convincingly portray a 53-year-old time traveler trapped in a school boy’s body. He has such an unsettling presence, and I mean that in the best way possible. Fifth, Ellen Page. While she didn’t really shine up until the last few episodes, not her fault because that is just how her character unfolds within the story, but she is a very skilled actress with great dramatic range. I was this short of bawling my eyes our with her. You can feel her anxieties and how much of it has kept her self-confidence at an all time low for most of her life.

I think the magic of The Umbrella Academy is the ensemble cast. They mesh well with each other, plus it is a really good-looking movie. The plot is decent.  Save for a few lagging moments, it has enough interesting mysteries to parcel out, and plenty of childhood trauma that makes for some good drama. Hopefully the next season would come with a tighter, sharper story. And perhaps maybe make the less interesting characters more um interesting. But all in all, I very much enjoyed it and will most definitely await season 2 with excitement.